On the eve of Thanksgiving, our volunteer Debbie fed the cats near her work, and on her way home, drove by the back of a local shelter. There was a lone box sitting by the back door. It was 6:10pm and the shelter had closed at 5:30pm. She continued driving, but then thought better of it. She pulled a U-turn, and went to inspect the box, where she found a little kitten with blood on his face. It was 49 degrees outside, and he probably would not have survived the night.

Kirby, as he is now called, spent the night at the emergency vet. He had a broken palate, a possible broken jaw, and an injury to his leg. The vets suspected the injuries were due to animal bites. He was also running a fever and having some trouble breathing. By Thanksgiving morning, he was ready to go home with Debbie, who was given pain meds and antibiotics for Kirby and instructions to be very careful with his fragile jaw. 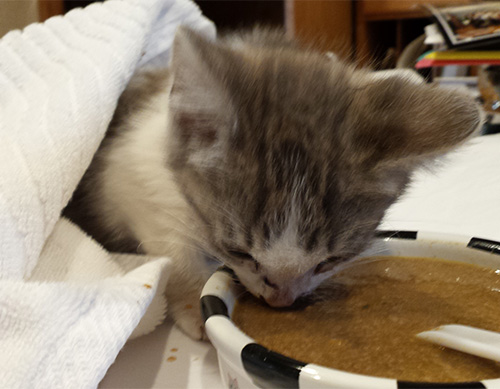 Kirby has turned out to be a tame little guy, although a bit nervous after the ordeal he’s been through. His fever broke, and it didn’t take long for him to start eating soft food on his own, which kept the trauma to his injured jaw minimal. After a week of bed rest and recovery, he saw our regular vet this week. His broken palate is healing on its own and his jaw is properly aligned, so it’s likely he won’t need any invasive procedures. The resilience of kittens is pretty amazing.

ICRA helps many sick and injured cats and kittens like Kirby each year. Please help us continue this life-saving by making a donation today.