Helping Cats with Your Help

ICRA is able to help many cats with special needs with the help of caring people like you. Make a donation today or take a look at other ways you can get involved.

Ruby was discovered in a backyard in Oakland with a garden chain tied around her neck and front leg, preventing her from touching her paw to the ground. She had been in this condition so long that the chain had cut into her bone and the skin had grown over it. In addition, her pelvis was broken and a kidney irreparably damaged, possibly the result of a kick, and the kidney required surgical removal. After three months of mental and physical rehabilitation in a loving foster home, she was adopted into a wonderful home with another ICRA alum.

After his guardian passed away, Pirate was left to fend for himself on the streets. He befriended a crossing guard and the children she guided safely across the street. He earned his name because he kept one eye shut. It turned out that he had a painful eye condition called entropion, which caused his eyelashes to grow inward and graze the surface of his eye. ICRA helped cover the cost of surgery to repair his eyelid, which saved his sight. He was adopted by the crossing guard.

Oliver was the victim of horrific abuse by a woman who eventually served time in jail for her abuse of at least 15 cats. Both his front legs had been broken and his chest crushed. He was in casts for over a month and had to relearn how to walk once they were removed. Oliver required emergency care on a few occasions and almost died a couple times, so his foster mom brought him everywhere with her to keep a close on eye on him. He was affectionate and trusting, despite the abuse, and when his casts came off and his legs grew strong, he became a real little imp, dive bombing the resident cats.

His family reports that Oliver “…now is eleven pounds of pure energy and love. He has even won over the approval of our seven year old tabby Amber, at least most of the time. Oliver greets us when we arrive home with his special meow, plays fetch with his toys until we are tired, and snuggles better than any cat who has owned us…As I type this, Oliver is on my lap helping me and making sure that the ‘right things’ are said about him. I just got a lick and a purr, so I guess everything is OK.”

Chocolate Bunny was another victim of the same woman who abused Oliver. His eye had been removed and he was starving when he was brought to a local veterinary hospital. ICRA took custody and he went to a foster home, where he blossomed immensely and helped unite a disparate group of felines. It’s not surprise that his foster parents couldn’t let him go and they eventually adopted him.

Alyssa and Cress were born to a feral mom in an Oakland community garden with a birth defect called eyelid agenesis, which causes malformed eyelids. To save their eyes, they were separated from their mother at a few days old, and an ICRA foster mom bottle fed them and applied ointment to their eyes every few hours. The community garden members helped ICRA raise more than $3,000 to cover the cost of eyelid repair surgery and the girls were eventually adopted by one of the members.

Cubby was typical of many kittens when they first come to ICRA. Rescued from the streets, he had never interacted with humans before. With intense socialization in a foster home, he learned to trust humans and was adopted into a loving home. 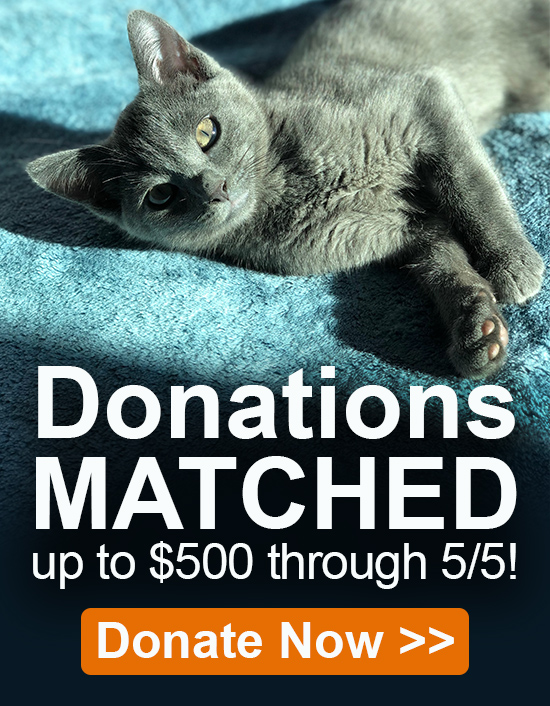